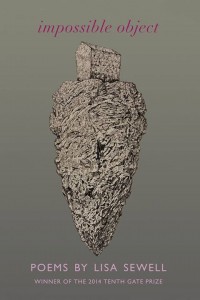 In these sharp, arresting poems, Lisa Sewell writes out of a place and time “when there is never a where or right place.” As the worlds of literature and life reflect, refract and conflate, she creates a space that is spellbindingly present.

Lisa Sewell has invented a new poetic genre. I’d call the mode ekphrastic, but ekphrasis doesn’t quite capture it. She eats, sleeps, and breathes books. Books are her lime flower tea—she recovers the past in books. Books are her avenue to political witness—they afford a foundational grammar for feeling and moral awareness. Books are her oxygen and elementary language. And therefore, these poems are anything but bookish. They are urgent; they are fresh; they acknowledge no divisions in the world, notbetween the landscape and the printed page, not between her neighbor’s suffering and her own being spared, not between the private and the public worlds. And this is the impossible object espoused in each and every line: connection in its purest form.

To speak of reading is to speak of love: it is the act when Eros enters into you and you eitherfind or lose yourself. In this brilliant book, Lisa Sewell speaks of encounters with books that “translate us back” to our inherited world or translate us ahead into another world which is as disturbing as it is comforting, full of outrage and tenderness. The territory she describes is “between a bleed and a blundering of borders.” It is a place in between civilization and itsdiscontents with its indistinguishable wishes and fears and the primary pleasure of being seized by the imagined. It’s a book of wonder and great extension of sympathy. 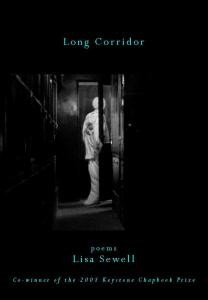 “Some selves present as halls of mirrors, but for Lisa Sewell, the poetic self—the lyric self, the speaking I—inhabits a hall of texts, a palace of moments in which personal experience resonates literally with someone else’s story. From Murder on the Orient Express to The Anatomy of Melancholy, Little House in the Big Woods to The Corrections, texts become sites against which a speaking self fragments, then constellates again as a sort of negative image through which the exigencies of our historical moment come into sharp focus. In these poems, King Lear and Ellis Island are joined at the spine, Iraq and Wharton’s House of Mirth, New Orleans and Poe’s Tales of the Grotesque and Arabesque. These lyrics suggest that in the end it may not be literature that haunts our lives, but our lives that haunt the longer, stranger, more oblique life of Literature.”

In Lisa Sewell’s new book of poems, Name Withheld, she asks: what could be done, what could I do? The answer to such a question is this book itself. Brilliantly energetic, emotionally tough and intellectually engaging, this book-as-answer is a daring, powerful kind of poetics, a feminist poetics, a gendered engagement with the world—as if Emily Dickinson’s transforming skills were suddenly seen as a way of saving the world.

Name Withheld is the dark side of confession’s moon, where privacy deepens because utterance—rich and elusive— reproves the voyeur, withholds what it must. Language hunts what is nocturnal, difficult to spot, heady with contradiction, dissonance, dismay, unmappable, yet moving at the core, her lines like the meteor’s tail, gesturing back to the heart of the radiant.

“In her collection, The Way Out, Lisa Sewell grapples with metaphorical and literal hungers with a magnetic density. Frank Bidart writes that Sewell offers a ‘terrible purity’ fashioned out of the ‘desolation’ her poems work through, poems with ‘great weight and power.’ I concur. We encounter an intelligent, elegant, darkly honest poet who feeds our eyes, ears, mind, and heart.”

“Sewell searches for what lies beneath her own humanity: her capacity for violence and love; what one’s ‘nature’ determines about oneself; and how the mind and spirit can exist willingly with the ‘knowledge that we are hopelessly enclosed / by the measure of our skins.’ . . . Sewell’s debut collection The Way Out, is a very fine read.”

“There’s a terrible purity to the desolation from which many of these poems emerge. They emerge with unlacquered finality. Their gaze is pitiless. Cumulatively, Sewell’s poems possess great weight and power. In this ferocious book you will find the consolation of something seen deeply, the consolations of art.”

“Lisa Sewell’s poetry brings to mind Keats’ phrase, ‘thinking through the heart.’ More than any young poet writing today, her work frames an urgency shot through with history as she builds a model of consciousness, original, strange. These poems enact a lyric muscle that explodes narrative, throws it wonderfully off track into new regions of feeling, thought, experience.”

“‘We are hopelessly enclosed by the measure of our skins,’ Lisa Sewell writes. The argument at the heart of this book is whether the body is a source of hopelessness or of hope. ‘I put my faith in the physical,’ Sewell tells us, but she understands how belief necessitates doubt, only existing beside it. Focused and accomplished, this fine debut collection is a fierce and engaging quarrel with the fact of flesh.”